I love this quote from the short story “Monday” by Mark Helprin:

“I’m fifty-three,” he answered with analytical detachment. “My father died at fifty nine. What good is money? If I have six years left or thirty, it makes no difference. My life will be buoyant, and my death will be tranquil, only if I can rest upon a store of honor.”

I love that around this time of year everyone celebrates. People bring free food into work. People take days off to go places and see family. People give gifts to each other. We get paid time off work. It’s rad. So I’m wondering, why do we only do this once a year? Would it kill us to have a similar holiday during the summer when it’s warm outside?
Posted by Dave W at 1:33 PM 1 comment:

Part of a good college education includes learning to hate Walmart. In more than one of my college classes we had lengthy discussions on the evils of The Superstore and how it makes rich people richer and poor people poorer. I blame Walmart for higher health care costs (I once heard that they hire senior citizens to be greeters for 39 hours per week so that they don’t have to pay them benefits), messing up the economy by manipulating suppliers, eliminating small businesses, over-filling landfills by selling junk, and making people feel like they need things they don’t. I once read a statistic that the average Walmart shopper visits the store four times per week. So, I feel like I should be part of the solution, not the problem—I never shop there. I don’t care if I can save money or if it’s the only place to get rice-crispy treat cereal, I refuse to be swayed.

Last weekend I was swayed. But it wasn’t my fault. I got a $25 gift card for volunteering at the hospital. Why the University of Utah Hospital is choosing to cooperate with the devil of the business world is beyond me. Maybe we really are classless. So, at the prospect of $25 of free junk, I went. But I had a plan. First, I parked as far away from the entrance as possible (because don’t all Walmart shoppers drive around for ten minutes until they get a front row spot?). Already feeling like I was sticking it to Sam Walton, I made the trek across the parking lot. Then, as I entered the store I kept my eyes to the ceiling, knowing perfectly well that situated between me and my goal (the DVD section) were countless stands strategically placed to hypnotize me into buying products I didn’t come for. After arriving at my destination I quickly searched until I found Star Trek (one of the best movies of 2009, by the way), when, to my dismay, Walmart threw me a curve I wasn’t expecting: regular DVD or blu-ray. My hands got a little sweaty as I tried to weigh out the options—they were both the same price, which didn’t help.

“It comes with a digital copy, you can watch it on your computer until you get a blu-ray, which you can buy here only for $147.99.”

What can you say to that? So I got the blu-ray version and got out of there as fast as I could (didn't want anyone to see me). It wasn’t until I got home that I fully came to realize the extent of my failure. Walmart had won. I bought something that I can’t even use, with the hopes that someday I will have the means. I hate that place. On an unrelated note, does anybody have a blu-ray player that’s interested in watching a movie?
Posted by Dave W at 2:22 PM 5 comments:

I have a very different job. Different from any of my friends, anyway. I work in a lab. It’s a great job but it’s difficult to explain to people. When they ask what I do I usually try to give as little information as possible because the longer I go on the more weird I sound. Telling someone “I study iron metabolism in yeast” puts me a step below accountants on the nerd scale. Writing this on the internet isn’t exactly a good way to keep it a secret, but here I can include some pictures that make it look more interesting, maybe. So, for those who are interested, here is what I do on a day-to-day basis. 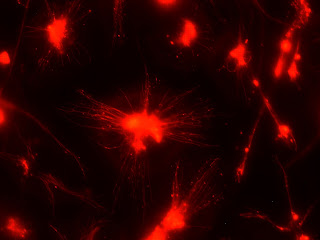 Macrophages with dyed lysosomes. (These are cells.) 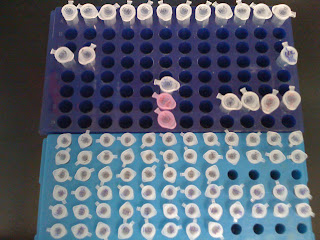 Eppendorph tubes. This is where most of the reactions happen. Boom. 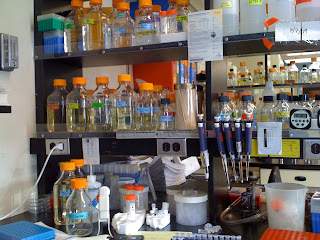 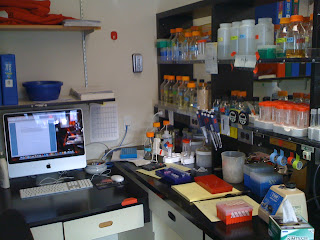 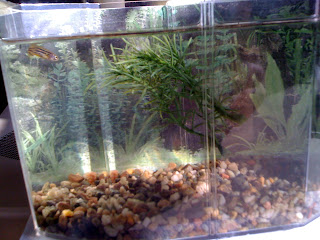 This is Jeremy, my fish. He loves sunshine and food. 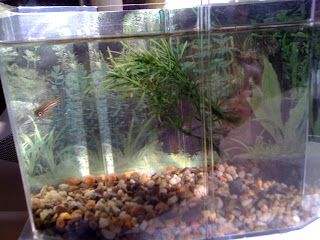 So, there you have it--a small taste of the daily routine of the yeast geneticist. Cool...right?
Posted by Dave W at 10:23 AM 3 comments: