And now, just to round things out and hopefully help us all understand the mind of a bear a little better: 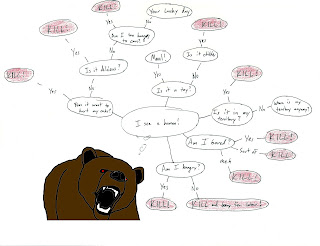 Amy was right, the last sketch I did of a bear was just too nice looking.  So I've drawn up a new picture for all those of you who think it might be fun to give a bear a hug. 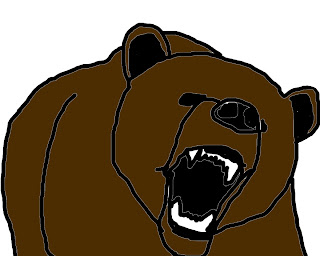 I was trying to decide if I should give him red eyes, just for that extra terror factor... 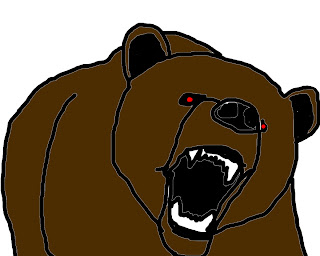 The other day at a dinner party the topic of bears came up.  There aren't really many things I'm afraid of in life, but bears scare me to death.  Remember when Alfred asks Bruce Wayne, "Why bats, master Bruce?"  And he answers, "Bats terrify me.  It's time my enemies share my dread."  If fear of an animal is what turns people into superheroes then it's a good thing I don't have billions of dollars or any enemies, because I would be Bearman, and things would get really ugly really fast.  I mean, bats can give you rabies (which is pretty terrifying), but we have vaccines for that.  No vaccine for a bear attack that I know of.  And you can kill a bat with a tennis racquet (my brother-in-law had to do it several times in their house in Virginia).  A tennis racquet, seriously?  Why would you be scared of bats?

I think my problem is that I have a pretty vivid imagination and so I've thought it through probably a thousand times and I still can't figure out how you could survive a bear attack.  First of all, they're huge--grizzly bears weigh up to 800 pounds and stand somewhere around 8 to 10 feet tall.  But the crazy thing is they're really fast, like 25-30 miles per hour fast.  That's about a 2.4 minute mile.  By the way, it would take a bear less than 8 minutes to run 5k at that pace.  And I've heard that the rumor about them not being able to run as fast downhill is false.  Fast, huge, strong, and lots of sharp things with which to hurt you--what is more scary than that?  Oh, and they can climb trees pretty well too.

I looked up "how to escape from a bear" on wikihow.com and they had some good ideas for survival.

1.  Avoid close encounters.  It says things like don't follow bear tracks.  It amazes me that there are people dumb enough to need this tip.

3.  Stand tall, even if the bear charges you.  Yeah, that's not going to happen.  I try to run away from dogs that attack me.  Speak loudly in a deep voice.  How about a deep chipmunk voice?  Because I'm pretty sure that's the best I'd be able to do with an 800 pound death machine coming at me.

4.  Know your bear.  Because a black bear is going to kill you differently from a brown or polar bear.  I think everyone should be well-versed in bear taxonomy.

5.  Understand the bear's motivations.  Motivations?  Bear psychology?  Correct me if I'm wrong, but I think it's pretty simple: 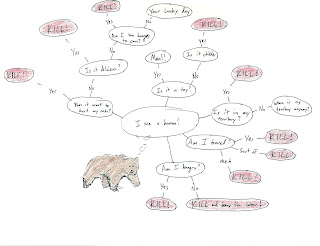 Still, somehow not very reassuring to me.  A bear encounter just seems like a lose-lose situation where all you can do is hope that the bear is stuffed, happy, and not surprised.
Posted by Dave W at 10:33 AM 6 comments:

I always knew that it was going to be difficult to succeed in medical school. But the last four months have been even more busy than I'd ever pictured. The thing that they don't tell you about before medical school is the exams. Partly the bi-weekly quizzes they give us to make sure we're staying up on the material, but mostly the standardized national exams. Since December I've switched over to a system where I study all day, every day for my national board exam (I take it in June) for 10 days, then cram for three days to pass the quizzes. At first I was hesitant because I was afraid that I would start failing the quizzes--oddly enough I started doing better. I have two theories for why this is:

1. There is some overlap between the board material and the class material.
2. The quizzes touch on small details from the powerpoints that are better held in the short-term memory for a couple of days (knowledge binge-and-purge method).

In reality it's probably a mixture of both. Either way, I've discovered a few things about my learning style in the process that have been helpful.

I think that there are three different principles of learning: memorizing, understanding, and integrating. Unfortunately for me, memorizing has never been my strong suit. I've always known this, but haven't had a good solution to the problem. But I'm coming to realize that if I can memorize stuff I can usually do pretty well understanding bigger picture concepts. So I've started focusing on flashcards (yesterday I made my 2000th flashcard since December). I spend at least a couple of hours going through cards every day on my computer in an effort to memorize everything. The remainder of my time I do practice questions (which is a whole different beast--I'll try to describe what they're like on here some other time).

These days I spend about 15 hours a day studying or in class, leaving about three for playing and eating. As much as that would have sounded miserable to me a couple of years ago, it's actually surprisingly rewarding. In some ways it feels like being a missionary again--you kind of just put your head down and go. It's not impressive or exceptional--it's just what you do when you're in medical school. And you find happiness in small successes, like getting the right answer on a question you would have missed a week before. It's progress, and that feels good.

As you can imagine, all this studying doesn't leave too much time for blogging. Even if I did have more time for it, not too much happens to you when you live at school. Still, I'm not ready to completely abandon my blog. But if you're reading this I'll warn you that, while there may be a couple more posts in the next few months, they're not likely to have anything too interesting.
Posted by Dave W at 12:50 PM 1 comment:

To my siblings who don't live in Salt Lake...

I took both of these pictures 20 minutes apart, the first up at Jeremy Ranch and the second down in the valley. I thought this might make you feel better about not being here for Christmas--the smog this year is extraordinary. 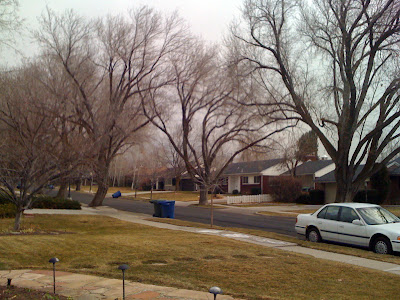 I'm always trying to figure out how I can be less tired in class. Not that I'm falling asleep or anything, but sometimes I'm just sleepy in the mornings. So the other day I had the brilliant idea of switching beds from the twin I've slept in for the last 20 years or so to the empty queen that used to be my sister's to see if I could sleep more soundly. It's big, soft, has sheets that probably have a thread count of 12000, and a down comforter--this was a fail-proof plan. It worked pretty well, until I had a dream I was attacked by a bear. Once I finally got my heart rate back down I drifted off again, this time to a dream that I was diagnosed with a brain tumor. At this point I was pretty sure I was not going to have an easier time in class in the morning. Nonetheless, I fell asleep again and had a dream that I had been left somewhere without a car or any way of contacting anyone. Fail. At least it wasn't the night before a test.
Posted by Dave W at 8:16 AM 2 comments:

If you ever want to be late to something, try to get stuck behind a Buick.
Posted by Dave W at 4:54 PM No comments: